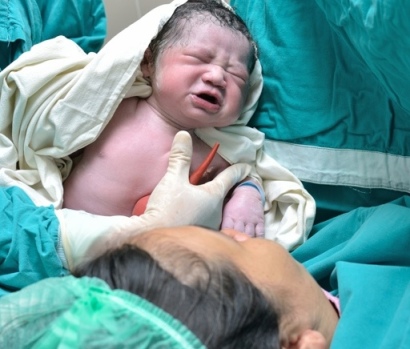 The short answer is yes, but the risks are very small, according to a study conducted by Professor Louise Kenny and colleagues from University College Cork, Ireland and Aarhus University, Denmark. The study was funded by the National Perinatal Epidemiology Centre, Cork, Ireland

The researchers obtained data for 832,996 women from Danish national registers regarding their first live birth, including whether they had a caesarean section (C-section), and then followed the women until they had a stillbirth, miscarriage, ectopic pregnancy or a second live birth.

Caesarian section did not increase the rate of subsequent miscarriages.

Given that both stillbirth and ectopic pregnancy are both rare outcomes of pregnancy, the researchers are keen to emphasise that the findings should not be a cause for concern to expectant mothers.

However according to Professor Kenny:

“The findings will better inform mums, dads and healthcare workers and aid on the management of pregnancy and in particular on the mode of delivery.  ‘Elective’ caesareans in situations where there is no medical necessity should be avoided. Even though the risk is small, it must be acknowledged.”

Too posh to push?

We’ve all heard that term related to women who choose to have a caesarean section for non-medical reasons. However, what many women forget is that a caesarean section is a serious surgery and comes with all the possible complications of any surgical procedure.

While we might smile at the ‘too posh to push’ label, many women actually choose an elective caesarean due to fear around childbirth and delivery.

As the researchers say, this study shows that the risks to future pregnancies following caesarean are very low, but they are not non existent. For the person who may be that one in 3000, a stillbirth or ectopic pregnancy is an extremely traumatic event. Therefore addressing fear around childbirth and looking more closely at reasons why women may be choosing elective caesareans, may be a valid part of pregnancy management.

In medical emergencies and where medically necessary, caesarean sections save lives. However it’s good that studies like this are flagging a need to rethink the idea of choosing what is ultimately a serious surgical procedure for non medical reasons.

A cesarean section is a surgical operation in which the baby is delivered through a cut made in the mother’s abdomen and womb instead of naturally through their mother’s vagina.

A cesarean section is usually performed when a vaginal birth would endanger the life of the mother or her unborn child because, for example, the baby is in the wrong position. Some cesareans are performed as emergency procedures, but others are planned in advance when the need for the operation becomes clear during pregnancy (an elective cesarean).

Some planned cesarean sections (elective caesareans) are also undertaken because the mother has requested a caesarean delivery in the absence of any medical reasons for such a delivery.

In England in 2010, the proportion of total births by cesarean section was almost 25%, compared with just 2% in the 1950s. In the United States and Australia rates of greater than 33% have been reported and in China and parts of South America, including Brazil and Paraguay cesarean rates of between 40% and 50% are common.

How could a Caesarean Section affect a future pregnancy?

Hypothesized biological mechanisms include placental abnormalities, prior infection, and adhesion formation due to cesarean section

This work was funded by the National Perinatal Epidemiology Centre, Cork, Ireland and conducted as part of the Health Research Board PhD Scholars programme in Health Services Research, Grant No. PHD/2007/16. LCK is a Science Foundation Ireland Principal Investigator (08/IN.1/B2083) and the Director of the SFI funded Centre, INFANT (12/RC/2272). The funders had no role in study design, data collection and analysis, decision to publish, or preparation of the manuscript.