Washington, DC – Surgeons and scientists from Sheikh Zayed Institute for Pediatric Surgical Innovation at Children’s National Health System are the first to demonstrate that supervised, autonomous robotic soft tissue surgery on a live subject (in vivo) in an open surgical setting is feasible and outperforms standard clinical techniques in a dynamic clinical environment.

The study, published May 4th in Science Translational Medicine, reports the results of soft tissue surgeries conducted on both inanimate porcine tissue and living pigs using STAR. This technology removes the surgeon’s hands from the procedure, instead utilizing the surgeon as supervisor, with soft tissue suturing autonomously planned and performed by the STAR robotic system.

Current soft tissue robot-assisted surgery (RAS) is limited to directly controlled master-slave use, which is highly dependent on the skill of the surgeon and does not take advantage of the precision, repeatability, and speed of robotic technology.

The goal of STAR is to create smart surgical tools that have the best techniques of experienced surgeons programmed into tools so that optimal efficiency, effectiveness, and safety are delivered consistently.

Medline defines an anastomosis as: “a surgical connection between two structures. It usually means a connection that is created between tubular structures, such as blood vessels or loops of intestine.For example, when part of an intestine is surgically removed, the two remaining ends are sewn or stapled together (anastomosed). The procedure is known as an intestinal anastomosis.”

Anastomosis is a critical task performed over a million times in the United States each year for visceral (gastrointestinal, urologic and gynecologic) indications alone. However, up to 30 percent of GI anastomoses are complicated by leakage, strictures, and stenosis.  Anastomosis remains one of the rate-limiting steps in broader adoption of minimally invasive surgery (MIS), particularly in children.

(iii) Collaborative decision support for surgical tasks between the surgeon and smart tools.

This research has the potential to significantly improve the function and outcome of anastomosis, not limited by surgeon’s technique, training, or experience.

See how it operates in Fig 1 below and also in the accompanying video clip. 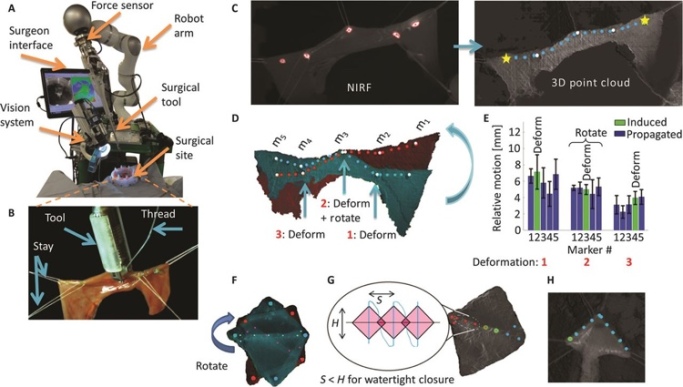 (C) The tissue was first marked by syringe with biocompatible NIRF markers to track motions through blood and tissue occlusions. A 3D surface point cloud was then acquired with the plenoptic camera. The NIRF markers (now white) were projected onto the point cloud after offline registration of the 2D NIR image and the 3D point cloud data. The suture plan was computed as a sequence of coordinates and suture types (yellow knots and blue running sutures) to achieve leak-free anastomosis by overlapping stitch compression zones.

(D) Point clouds of initial (blue) and deformed (red) tissue. STAR performance was then evaluated under random ex vivo deformations. Three deformations were induced on NIRF markers 2, 3, and 4 with an additional bowel rotation at the second deformation. m, marker.

(F) The 3D point cloud during end-to-end anastomosis before (blue) and after (red) deformations. The tissue was tracked by the combined NIRF and 3D plenoptic vision system.

(G) The theory behind spacing of running suture is adapted from Mehdorn &Müller (1989). The spacing was informed by the tissue thickness to ensure that the suture spacing S was smaller than bite size H. The zones of compression for each stitch, illustrated in pink, overlapped for leak-free anastomosis. A suture plan was initially created by interpolating between the tracked positions of NIRF markers and updated as the tissue deformed. On the right, the suture plan is overlaid on the bowel point cloud. Points outlined in green are knot locations. The plan for end-to-end anastomosis used two sutures. First, a running suture (red) was applied on the back wall (from right to left) after tying the first knot (green). At the left corner, the needle pierced the tissue from inside, which was later used to tie the final knot. Second, another running suture (blue) was applied on the back wall (left to right) after tying the second knot. Similarly, at the corner, the tissue was pierced from inside to outside.

(H) Once the right corner was completed, the tissue was flipped manually, such that the edges of the front walls were close to each other. The suture plan calculated the running suture positions (blue) to continue from the right corner with the same suture.

“Our results demonstrate the potential for autonomous robots to improve the efficacy, consistency, functional outcome and accessibility of surgical techniques,” said Dr. Peter C. Kim, Vice President and Associate Surgeon-in-Chief, Sheikh Zayed Institute for Pediatric Surgical Innovation. “The intent of this demonstration is not to replace surgeons, but to expand human capacity and capability through enhanced vision, dexterity and complementary machine intelligence for improved surgical outcomes.”

While robot-assisted surgery (RAS) has increased in adoption in healthcare settings, the execution of soft tissue surgery has remained entirely manual, largely because the unpredictable, elastic and plastic changes in soft tissues that occur during surgery, requiring the surgeon to make constant adjustments.

To overcome this challenge, STAR uses a tracking system that integrates near infrared florescent (NIRF) markers and 3D plenoptic vision, which captures light field information to provide images of a scene in three dimensions. This system enables accurate, uninhibited tracking of tissue motion and change throughout the surgical procedure. This tracking is combined with another STAR innovation, an intelligent algorithm that guides the surgical plan and autonomously makes adjustments to the plan in real time as tissue moves and other changes occur.  The STAR system also employs force sensing, submillimeter positioning and actuated surgical tools. It has a bed-side lightweight robot arm extended with an articulated laparoscopic suturing tool for a combined eight degrees-of-freedom robot.

“Until now, autonomous robot surgery has been limited to applications with rigid anatomy, such as bone cutting, because they are more predictable,” said Axel Krieger, PhD, and technical lead for Smart Tools at Sheikh Zayed Institute for Pediatric Surgical Innovation at Children’s National. “By using novel tissue tracking and applied force measurement, coupled with suture automation software, our robotic system can detect arbitrary tissue motions in real time and automatically adjust.”

To compare the effectiveness of STAR to other available surgical procedures, the study included two different surgeries performed on inanimate porcine tissue (ex vivo), linear suturing and an end-to-end intestinal anastomosis, which involves connecting the tubular loops of the intestine. The results of each surgery were compared with the same surgical procedure conducted manually by an experienced surgeon, by laparoscopy, and by RAS with the daVinci Surgical System.

Intestinal anastomosis was the surgical procedure conducted on the living subjects (in vivo) in the study.  The Children’s National research team conducted four anastomosis surgeries on living pigs using STAR technology and all subjects survived with no complications. The study compared these results to the same procedure conducted manually by an experienced surgeon using standard surgical tools.

“We chose the complex task of anastomosis as proof of concept because this soft tissue surgery is performed over one million times in the U.S. annually,” said Dr. Kim.

All surgeries were compared based on the metrics of anastomosis including the consistency of suturing based on average suture spacing, the pressure at which the anastomosis leaked, the number of mistakes that required removing the needle from the tissue, completion time and lumen reduction, which measures any constriction in the size of the tubular opening.

The comparison showed that supervised autonomous robotic procedures using STAR proved superior to surgery performed by experienced surgeons and RAS techniques, whether on static porcine tissues or on living specimens, in areas such as consistent suture spacing, which helps to promote healing, and in withstanding higher leak pressures, as leakage can be a significant complication from anastomosis surgery. Mistakes requiring needle removal were minimal and lumen reduction for the STAR surgeries was within the acceptable range.

In the comparison using living subjects, the manual control surgery took less time, eight minutes versus 35 minutes for the fastest STAR procedure, however researchers noted that the duration of the STAR surgery was comparable to the average for clinical laparoscopic anastomosis, which ranges from 30 minutes to 90 minutes, depending on complexity of the procedure.

Dr. Kim said that since supervised, autonomous robotic surgery for soft tissue procedures has been proven effective, a next step in the development cycle would be further miniaturization of tools and improved sensors to allow for wider use of the STAR system.

He added that, with the right partner, some or all of the technology can be brought into the clinical space and bedside within the next two years.

The Sheikh Zayed Institute for Pediatric Surgical Innovation at Children’s National Health System is a hub for innovation focused on making pediatric surgery more precise, less invasive and pain free. Founded in 2010 through a $150 million gift from the government of Abu Dhabi, the institute currently has more than 20 investigators primarily affiliated with the institute and more than 70 technical and scientific staff, including postgraduate and graduate students and fellows. The institute is further supported by, and has access to, more than 600 clinicians and clinician-scientists with Children’s National and the Children’s Research Institute, the research arm of Children’s National.